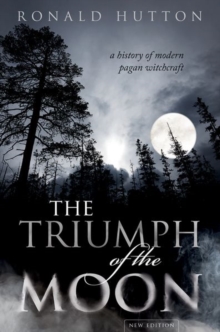 The Triumph of the Moon : A History of Modern Pagan Witchcraft Hardback

This is the second, and extensively revised, edition of the first full-scale scholarly study of what is arguably the only fully-formed religion that England has ever given the world: that of modern pagan witchcraft, which has now spread from English shores across four continents.

Ronald Hutton examines the nature of that religion and its development, and offers a history of attitudes to witchcraft, paganism and magic in British society since 1800.

We also find some of the leading figures of English literature, from the Romantic poets to W.

B. Yeats, D. H. Lawrence and RobertGraves, as well as the main personalities who have represented pagan witchcraft to the public world since 1950.

Thriller writers like Dennis Wheatley, and films and television programmes, get similar coverage, as does tabloid journalism.

The material is by its very nature often sensational, and care istaken throughout to distinguish fact from fantasy, in a manner not hitherto applied to most of the stories involved.

Consistently densely researched, Triumph of the Moon presents an authoritative insight into an aspect of modern cultural history which has attracted sensational publicity but has hitherto been little understood.

This edition incorporates all of the new research carried out into the subject by the author, and by others who have often been inspired by this book, during the twenty years since it was first published.