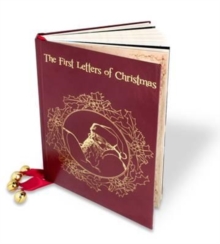 by Roque B. Fernandez

The First Letters of Christmas Father's Christmas Eve magical moment Inspires unique "heirloom" book The First Letters of Christmas is a soon-to-be-released story/scrapbook that not only tells a traditional, magical tale of the most anticipated night of the year, but also becomes a timeless keepsake for children's letters to Santa. Leather-bound and of the highest quality, The First Letters of Christmas will preserve the sweetest, purest moments of childhood forever.The First Letters of Christmas has been carefully crafted to capture and save some of the most endearing moments that grace our lives at Christmas, one of the most special and memorable times of the year.One Christmas Eve, as author Roque Fernandez and his family were preparing for another special day, his son handed him a note - a beautiful, carefully-crafted letter to Santa. The care and attention that had gone into preparing the letter was the inspiration behind the creation of the new book."My son was too young to write so had drawn each of the presents he wanted," he explains. "It had obviously taken him a long time and, through this outpouring of his heart and the anticipated magic of what was to come, I came to see that Christmas provides some of the purest and most special displays of the innocence of childhood. This is when I decided that, rather than post the letter and lose it forever, it deserved to be kept as a family heirloom and raw display of purity."An innovative creator at heart, Fernandez's idea rapidly spiraled into a unique Christmas keepsake book that he's now about to release to the world. 'The First Letters of Christmas' is part storybook, part scrapbook and a timeless keepsake that no family should be without.Along with intricate illustrations that depict an inspiring journey towards the most anticipated night of the year, The First Letters of Christmas also holds a letter template that helps each child to write their special note to Santa whilst saving a copy in the book allowing you to revisit that special moment in years to come.The book has been beautifully bound in leather to give it that "Dickensian" festive feel and to ensure it and comes with its very own Hessian Santa Sack so it can stand the test of time.

The book is to be put away with the Christmas decorations each year and to be brought out again when the festive season is upon us a ready to enjoy the special ritual of writing the first letters of Christmas.