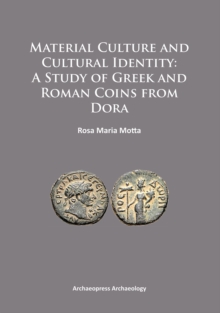 Material Culture and Cultural Identity: A Study of Greek and Roman Coins from Dora Paperback / softback

The ancient harbor town of Dor/Dora in modern Israel has a history that spanned from the Bronze Age until the Late Roman Era.

The story of its peoples can be assembled from a variety of historical and archaeological sources derived from the nearly thirty years of research at Tel Dor - the archaeological site of the ancient city.

Each primary source offers a certain kind of information with its own perspective.

In the attempt to understand the city during its Graeco-Roman years - a time when Dora reached its largest physical extent and gained enough importance to mint its own coins, numismatic sources provide key information.

With their politically, socio-culturally and territorially specific iconography, Dora's coins indeed reveal that the city was self-aware of itself as a continuous culture, beginning with its Phoenician origins and continuing into its Roman present.