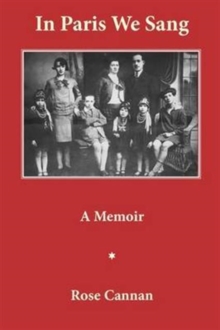 In Paris We Sang : A Memoir Paperback / softback

'In Paris We Sang' is a powerful memoir of Nazi Germany and a woman's journey to a new life in Britain.

Born in 1922 , Rose Cannan witnessed the rise of National Socialism and her shockingly honest story brings fully to life those dark days.

Rose and her family escaped from Germany, arriving in Britain just before WWII and survived the Blitz.

On Valentine's Day 1943 she married Evansky, a fellow hairdresser.

Working together, it was Rose who became part of the legendary 60's scene in London, working alongside Vidal Sassoon and Leonard.

She is widely known to have invented the the Blow-Dry.

Now in her early 90's, Rose Cannan looks back on a more than eventful life and readers will be stirred by her extraordinary story.