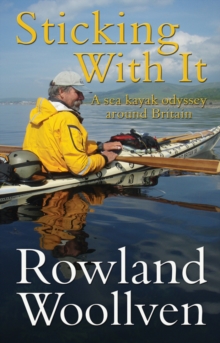 Sticking with it : A Sea Kayak Odyssey Around Britain Paperback

This is an account of the 19th circumnavigation of Britain by sea kayak - by the oldest paddler to complete this, the premier sea kayak expedition in British waters.

In 2008, Rowland Woollven and Cath Tanner set off from Ilfracombe in North Devon with the intention of returning there - via Capeï¿½ Wrath and Dover! - later that same year. Things did not quite go according to plan, however; beset by bad weather and other delays, it was not until 2012 that Rowland, now accompanied by Wendy and Barry Bramley, paddled back into Ilfracombe Harbour. Sticking With It is the intensely personal story of how one man's dream unfolded, reaching a successful conclusion after epic adventures around more than 2,000 nautical miles of Britain's stunning coastline.

Share the lows and highs of an extended expedition - from days spent wet and cold, stormbound, in remote locations, to the views and experiences of the coast open only to those who adventure in sea kayaks.

Although they combine to complete one overall voyage, this is an account of three very different expeditions, each with its own personality.

What does it feel like to have to paddle for one's life - and how does it feel to finally accomplish a long sought-after dream?

Stickingï¿½ With It is Rowland's fascinating story, and will appeal to fans of travel writing, in particular sailing and kayaking.