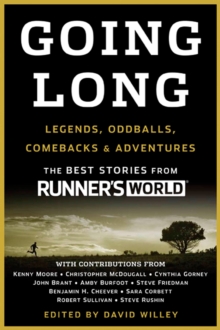 For more than 40 years, "Runner's World" magazine has been the world's leading authority on running - bringing its readers the latest advice on training, nutrition, and some of the most compelling sports narratives ever told.

From inspirational stories such as "A Second Life" (the story of Matt Long, the FDNY firefighter who learned to run again after his leg was crushed by a 20-ton bus) to analytical essays such as "White Men Can't Run" (a look at what puts African runners at the front of the pack), the magazine captures the mind, hearts, and emotions of its readers every month.

Now, for the first time, the editors of "Runner's World" have gathered these and other powerful tales of inspiration, elite athletes, oddballs, races, and adventures to give readers a collection of writing that is impossible to put down.

With more than 40 gripping stories, "Going Long" transcends the sport of running to reach any reader with an appetite for drama, inspiration, and a glimpse into the human condition.