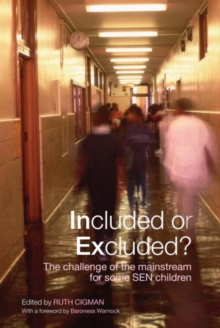 Included or Excluded? : The Challenge of the Mainstream for Some SEN Children Paperback / softback

In a pamphlet published in 2005 Mary Warnock expressed concerns about some of the concepts that she had helped to introduce in the field of special education almost three decades earlier.

She argued that the role of special schools was unclear and the pursuit of inclusion had become too ideological.

This highly topical book suggests that distinctions should be made between kinds of special needs and the possibility addressed that some SEN children might be happier and more effective as learners within non-mainstream settings.

Her call for a government review to investigate these problems raised its media profile, fuelling the debate.

This book pulls together contributions from all sides of the argument. An essential read for anyone involved in special education as well as the philosophy and ethics of education this book truly breaks new ground.