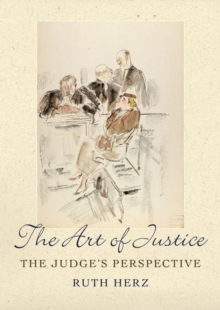 The Art of Justice : the Judge's Perspective Hardback

This book presents a unique and intriguing collection of drawings of courtroom scenes.

Entering the courtroom wearing his robe, Judge Pierre Cavellat literally had a secret up his sleeve.

Hidden in it were pens and pencils, which he used to sketch the scenes he observed from his bench.

Throughout a 40-year judicial career in one of France's more important regional appellate courts, Cavellat produced hundreds of illuminating drawings and paintings depicting the court proceedings but also the main actors: the prosecutors, defence counsel, his fellow judges, the defendants, witnesses, policemen, the general public, as well as the courtroom itself and its architecture.

The resulting vivid and uncensored impressions give an unprecedented insight into how a judge perceives his profession and the institution of justice as a whole.

Given the scarcity of written autobiographies by judges, and their reluctance to lay bare their inner feelings and thinking, the images reveal, in a candid and immediate fashion, the deeply hidden emotions, ambiguities and fantasies of a judge going about his work.

The author, a judge herself, interprets the images through the lens of her own judicial experience, exploring how judges think and act and how their thinking is constructed through their education, professional training, gender and class.

In doing so she exposes how personal background, history and experience play an additional, sometimes conflicting, role in 'judgecraft'.

While relevant to both practitioners and students of law this book should also appeal to the wider public.