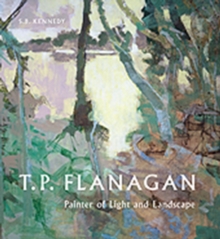 This is the first comprehensive assessment of the career of T.P.

Flanagan (1929-2011), generally regarded as the major landscapist working in Ireland in the second half of the twentieth century and the most significant watercolourist of his generation in Ireland.

Educated at the Belfast College of Art, in his work Flanagan placed great emphasis on drawing and the rendition of forms through tonal relationships.

As a painter he always eschewed abstraction maintaining what he called a 'respect' for nature and a 'human identity,' his work being the outcome of deep meditation rather than recorded observation.

Yet many of his paintings verge on minimalism and often come close to conceptualism. Although he painted portraits and still-lifes, landscape was Flanagan's main interest.

His explorations of form and his experimentation with materials have left a rich body of pictures which range from works capturing the subtleties of refraction and reflection to those tackling challenging themes such as Northern Ireland's 'troubles'.

Skilfully drawing together the many strands of Flanagan's prolific career, S.B. Kennedy presents the definitive account of the life and work of one of Ireland's foremost artists.