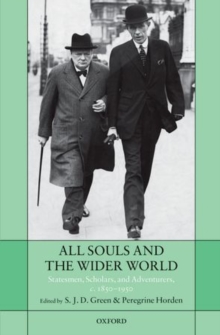 All Souls and the Wider World : Statesmen, Scholars, and Adventurers, c. 1850-1950 Hardback

All Souls College, Oxford, has been both widely praised and roundly abused for its fellows' non-academic pursuits.

How was it that members of the college so often held dual citizenship in the worlds of learning and public affairs?

Why, instead of becoming teaching 'dons', could they be found in government and politics, in law, diplomacy, and running the empire, in formulating foreign policy (including, supposedly, 'appeasement' of Hitler), in banking, journalism, andthe 'republic of letters'?

Part of the answer lies in the nature of the foundation.

Chichele's medieval college was always meant to be a training ground for careers in Church and government.

But the origins of the modern phenomenon of 'prize fellows' active in a wider world beyond Oxford lies in thehistory of the College during the decades around 1900, and in its 'second foundation' by the Warden, Sir William Anson.

The studies collected in this volume explore the context, significance, and legacy of Anson's wardenship.

They trace the activities of 'prize' and other fellows, both individually and in groups, in settings that range geographically from London to the capitals of empire and commonwealth in Africa, India, and Australia, and chronologically from the years preceding the FirstWorld War to the Suez crisis.