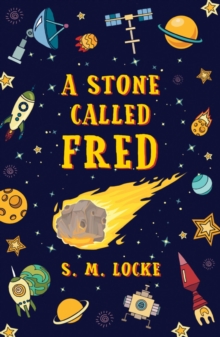 A unique take on a children's fantasy book- the 'hero' is a pebble called Fred. Although largely set in the present, the book transports reader's to the early twentieth century. Ideal for children 12 years and over. Jack Watt is a teenager, rather given to over-quick conclusions.

Finding what looks like an explosive device on his kitchen table one morning, Jack Watt alerts the rest of the house.

The device turns out to be a mysterious object which leads him into all sorts of adventures and trouble. Joe, his downstairs neighbour, is more sceptical. Even more so, when "the bomb" is found to be nothing more than a harmless stone one might find on a beach or garden path.

Jack knows otherwise, for later that day, he has some weird experiences with the strange visitor he names Fred. When Jack's journalist girlfriend, Fiona McDuff returns from an assignment, she is eventually impressed by the powers of the stone and convinces the others to spy on the Royal Family at a theatrical event, but the evening doesn't go according to plan... Through a turn of mysterious events, Jack and Fred travel in time to the early twentieth century.

A Stone Called Fred is an ideal read for children 12 years and over, and fans of fantasy and adventure fiction.