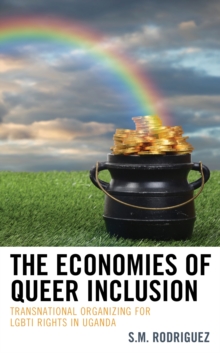 The Economies of Queer Inclusion : Transnational Organizing for LGBTI Rights in Uganda Hardback

The Anti-Homosexuality (dubbed "Kill the Gays") Bill of 2009 propelled Uganda to the forefront of global media.

In its initial manifestation, the Bill threatened to penalize "aggravated homosexuality" with the death penalty.

The media attention earned by the proposed legislation opened avenues for transnational cooperation and communication between US-based Human and LGBTI Rights organizations and kuchu (or LGBTI) Ugandans.

The Economies of Queer Inclusion focuses on this transnational relationship and the complications that arise when international currency and professionalization transform grassroots organizing. This book excavates how transnational advocacy, which aims to empower LGBTI rights activism, actually restructures and, in some cases, limits local movements.

With interview and ethnographic data with activists in Kampala, Uganda and New York City, the research highlights how the introduction of international attention and funding causes organizations to restructure their movement goals and strategies in order to best attract desired partners.

The funder-funded relationship causes both local discord and transnational divestment from alternative forms of organizing.

The research presents a compelling, counter-narrative that exposes that the development of this economy did not occur because of the Anti-Homosexuality, but rather inspired the legislation and then peaked in the five years following.

As an engaged, ethnographic look into a social justice movement, the text explores organizational structures and activist strategies in order to critique and strengthen future mobilization.

Accordingly, the text applies various sociological and critical race theories to provide an incisive and in-depth exploration of a powerful political moment.