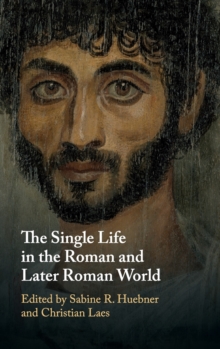 The Single Life in the Roman and Later Roman World Hardback

Using a variety of historical sources and methodological approaches, this book presents the first large-scale study of single men and women in the Roman world, from the Roman Republic to Late Antiquity and covering virtually all periods of the ancient Mediterranean.

It asks how singleness was defined and for what reasons people might find themselves unmarried.

While marriage was generally favoured by philosophers and legislators, with the arguments against largely confined to genres like satire and comedy, the advent of Christianity brought about a more complex range of thinking regarding its desirability.

Demographic, archaeological and socio-economic perspectives are considered, and in particular the relationship of singleness to the Roman household and family structures.

The volume concludes by introducing a number of comparative perspectives, drawn from the early Islamic world and from other parts of Europe down to and including the nineteenth century, in order to highlight possibilities for the Roman world.