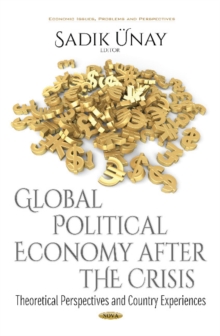 The established structural parameters of the global political economy underwent a profound transformation following the global economic crisis which triggered a paradigmatic change in terms of both the theoretical underpinnings and practical formulations of mainstream approaches to macroeconomic management and development.

Neither the industrialized nor the newly industrializing economies were immune from the tumultuous impact of the ever-deepening global crisis, as a result of which a series of non-conventional policy responses were developed and swiftly implemented by policy makers across a wide range of policy areas.

Neo-Keynesian emergency measures almost became the global norm, rather than the exception, in most of the leading global economic powers; thereby substantially increasing the relative emphasis in the economic importance and role of the state in the post-crisis period.

Against this critical global background, this collection represents the manifestation of a brave effort by a fledgling group of political economy experts from Turkey striving to explore the nature of the multi-layered structural transformations triggered by the global economic crisis in the established institutions, norms, policy patterns, and theoretical tenets of the modern global political economy.

The collection contains articles that present general analyses pertaining to theoretical and practical issues pertinent to the post-crisis transformation of the global political economy; as well as interesting country case studies illuminating the positive and negative features of national experiments with crisis-management in emerging economies.

The authors seek to reply to the critical question of how the global governance structures, theoretical perspectives used to legitimize them, national policy patterns, and public policy attitudes affecting crisis response strategies were influenced by the unprecedented impact of the global economic crisis.

The collection includes innovative pieces of analysis that look at the ascendancy of multipolarity in the global system and perceptive changes on the BRICS; the shifting natures of macroeconomic management, central banking and global governance architecture through the empowerment of global platforms such as the G20; the fate of the developmental state in East Asia after the global crisis; the crisis-exit performances of emerging economic powers such as China, India, Brazil and Turkey; post-crisis methods of economic adjustment across East Asia in Japan, China and Korea; the potential of new metropoles such as Shanghai to emerge as international financial centres; the dynamics influencing the level of gold reserves held by central banks; changes in Cuba along with the world economy; and energy security in the Persian Gulf.

The book carries the promise of offering the readers a fresh and insightful analysis on both the theoretical and practical manifestations of the ongoing structural transformation in the global system from an inclusive international political economy (IPE) perspective that liberally draws from the disciplines of political science, economics, history, international relations and sociology.

As such, it will attract the attention of scholars, academics and intellectuals contemplating the future trajectory of the global political economy after the crisis; as well as policy makers and practitioners focusing on the global shift towards emerging economies.