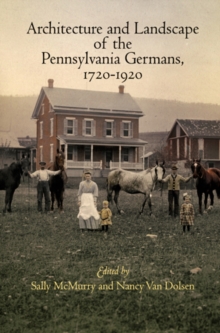 Architecture and Landscape of the Pennsylvania Germans, 1720-1920 Hardback

The phrase "Pennsylvania German architecture" likely conjures images of either the "continental" three-room house with its huge hearth and five-plate stoves, or the huge Pennsylvania bank barn with its projecting overshoot.

These and other trademarks of Pennsylvania German architecture have prompted great interest among a wide audience, from tourists and genealogists to architectural historians, antiquarians, and folklorists.

Since the nineteenth century, scholars have engaged in field measurement and drawing, photographic documentation, and careful observation, resulting in a scholarly conversation about Pennsylvania German building traditions.

What cultural patterns were being expressed in these buildings?

Since those early forays, our understanding has moved well beyond the three-room house and the forebay barn. In Architecture and Landscape of the Pennsylvania Germans, 1720-1920, eight essays by leading scholars and preservation professionals not only describe important architectural sites but also offer original interpretive insights that will help advance understanding of Pennsylvania German culture and history.

The essays bring to bear years of field observation as well as engagement with current scholarly perspectives on issues such as the nature of "ethnicity," the social construction of landscape, and recent historiography about the Pennsylvania Germans.