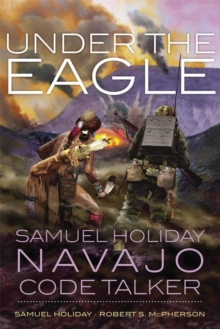 Samuel Holiday was one of a small group of Navajo men enlisted by the Marine Corps during World War II to use their native language to transmit secret communications on the battlefield.

Based on extensive interviews with Robert S. McPherson, Under the Eagle is Holiday's vivid account of his own story.

It is the only book-length oral history of a Navajo code talker in which the narrator relates his experiences in his own voice and words. Under the Eagle carries the reader from Holiday's childhood years in rural Monument Valley, Utah, into the world of the United States's Pacific campaign against Japan - to such places as Kwajalein, Saipan, Tinian, and Iwo Jima.

Central to Holiday's story is his Navajo worldview, which shapes how he views his upbringing in Utah, his time at an Indian boarding school, and his experiences during World War II.

Holiday's story, coupled with historical and cultural commentary by McPherson, shows how traditional Navajo practices gave strength and healing to soldiers facing danger and hardship and to veterans during their difficult readjustment to life after the war. The Navajo code talkers have become famous in recent years through books and movies that have dramatized their remarkable story.

Their wartime achievements are also a source of national pride for the Navajos. And yet, as McPherson explains, Holiday's own experience was ""as much mental and spiritual as it was physical."" This decorated marine served ""under the eagle"" not only as a soldier but also as a Navajo man deeply aware of his cultural obligations.