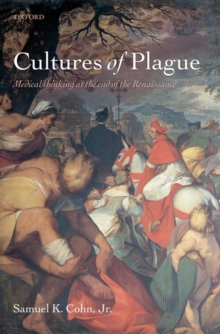 Cultures of Plague : Medical thinking at the end of the Renaissance Hardback

Cultures of Plague opens a new chapter in the history of medicine.

Neither the plague nor the ideas it stimulated were static, fixed in a timeless Galenic vacuum over five centuries, as historians and scientists commonly assume.

As plague evolved in its pathology, modes of transmission, and the social characteristics of its victims, so too did medical thinking about plague develop. This study of plague imprints from academic medical treatises to plague poetry highlights the most feared and devastating epidemic of the sixteenth-century, one that threatened Italy top to toe from 1575 to 1578 and unleashed an avalanche of plague writing.

From erudite definitions, remote causes, cures and recipes, physicians now directed their plague writings to the prince and discovered their most 'valiant remedies' in public health: strict segregation of the healthy and ill, cleaningstreets and latrines, addressing the long-term causes of plague-poverty.

Those outside the medical profession joined the chorus.

In the heartland of Counter-Reformation Italy, physicians along with those outside the profession questioned the foundations of Galenic and Renaissance medicine, even the role of God.

Assaults on medieval and Renaissance medicine did not need to await the Protestant-Paracelsian alliance of seventeenth-century in northern Europe.

Instead, creative forces planted by the pandemic of 1575-8 sowed seeds of doubt and unveiled new concerns and ideas within that supposedly most conservative form ofmedical writing, the plague tract.

Relying on health board statistics and dramatized with eyewitness descriptions of bizarre happenings, human misery, and suffering, these writers created the structure for plague classics of the eighteenth century, and by tracking the contagion's complex and crooked paths, they anticipated trends of nineteenth-century epidemiology.