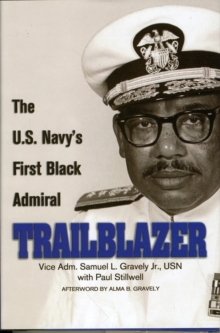 A Navy pioneer, Vice Adm. Samuel Gravely was the first African American to be commissioned an officer in the U.S.

In this memoir, co-written by the noted naval historian Paul Stillwell, he describes his life from boyhood in Richmond, Virginia, through his enlisted service on a World War II submarine chaser, to later tours of duty at sea and ashore.

Denied housing and even jailed for impersonating an officer, Gravely recounts his efforts to overcome both cultural and institutional obstacles of racism.

In 2009, the Navy named a guided missile destroyer in his honour. About the AuthorsVice Adm. Samuel L. Gravely, Jr., was commissioned in 1944, promoted to admiral in 1971, and retired from the Navy in 1980.

He died in 2004. Paul Stillwell is the author of the award-winning The Golden Thirteen: Recollections of the First Black Naval Officers.

He lives in Arnold, MD.