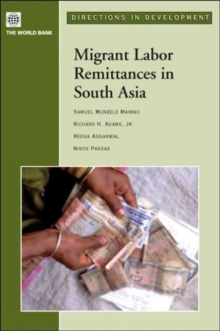 According to a recent World Bank study of remittances, Bangladesh, India, Pakistan and Sri Lanka are all among the top 20 receivers of remittances, with estimated receipts of US$3.2 billion, US$8.4 billion and U.S$ 1.5 billion respectively. ""Migrant Labor Remittances in South Asia"" identifies and discusses the key issues affecting the remittance industry in South Asia.

It examines the development and implementation of policies, processes, and infrastructure to foster a development-oriented transfer of financial resources between migrants in developed economies and their families in the region. Rather than duplicate previous remittances work, this title only focuses on the region's distinguishing characteristics, namely: a large migrant population of semi-skilled and unskilled workers largely concentrated in the Arabian Gulf countries, particularly Saudi Arabia and the United Arab Emirates; the presence of dedicated public institutions and government financial incentives aimed at facilitating and providing incentives for temporary migration and remittance inflows; the existence of large state bank branch networks with immense potential for a more effective and efficient remittance financial market; and the widespread usage of trade related informal remittance channels by both legal and illegal migrants.

The book is intended for policymakers who legislate and regulate the financial sector, as well as for researchers and providers of remittance services. 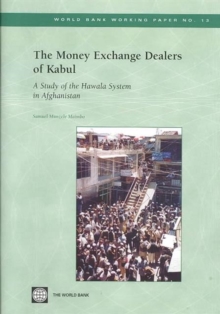 The Money Exchange Dealers of Kabul