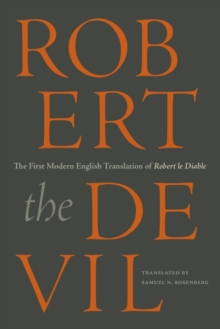 Samuel N. Rosenberg, one of the premier translators of Old French, presents in this volume the first modern English-language version of the thirteenth-century French romance Robert le Diable, a tale of supernatural birth and spiritual redemption. Robert is born after his mother, a childless noblewoman, secretly calls upon Satan to help her conceive.

His wicked behavior as a boy and, later, as a destructive young man is so brutal that one day Robert prevails upon his mother to reveal the secret of his birth and thus the source of his wickedness.

Upon learning the truth, he leaves his privileged home in Normandy to seek salvation.

Robert's lengthy penance-under the aegis of the Pope and a pious hermit-begins with his acting as a mute fool in the Roman Emperor's court and ends with his sainthood.

In between he plays the hero's role in defeating the Turks in battle and turns down the hand of the Emperor's daughter in marriage, choosing instead to return to the hermit's abode. The legend of Robert le Diable was extraordinarily influential in the seven hundred years after its creation, generating new versions and adaptations in various languages, ranging from sixteenth-century English adaptations by Wynken de Worde and Thomas Lodge to Giacomo Meyerbeer's esteemed 1831 opera.