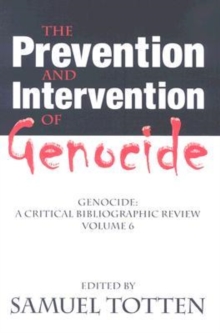 The Prevention and Intervention of Genocide Hardback

Over the last twenty years the world has witnessed four major genocides.

Most observers agree there is an urgent need to assess the international community's efforts to prevent genocide and to intervene (once a genocide is under way) in an effective and timely manner.

This volume, the latest in a widely respected series on the subject of genocide, provides an overview of a host of issues germane to this task. The book begins with a cogent discussion of the issues of prevention and intervention during the Cold War years.

The second chapter discusses the abject failures and moderate (though, in some cases, highly controversial) successes at prevention and intervention carried out in the 1990s and early 2000s.

Further chapters examine latest efforts to develop an effective genocide early warning system and examine the complexity of and barriers to prevention.

The pros and cons of sanctions and the problems of enforcement and evaluation their effectiveness are then discussed.

Conflicts between state sovereignty and the protection of threatened populations are examined both in historical context and by incorporating the latest thinking. Later chapters treat the issue of intervention; why and how it has met with only limited success.

Concentrating on Rwanda and Srebrenica, chapter 8 discusses various peace operations that were abject failures and those that were moderately successful.

The concept of an anti-genocide regime is examined in terms of progress in developing such a regime as well as what the international community must do in order to implement it.

Chapters discuss key issues related to post-genocidal periods, those that need to be addressed in order to establish stability in a wounded land and populace as well as to prevent future genocides.

The final chapter asks whether bringing perpetrators to justice has any impact in breaking impunity, ensuring deterrence, and bringing about reconciliation. The contributors to the volume are all noted scholars, some of whom specialize in the study of genocide, and others who specialize in such areas as early warning, peacekeeping, and sanctions.