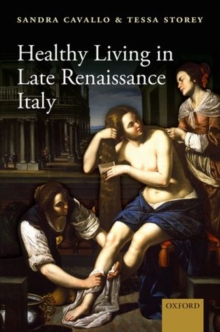 Drawing on a wide variety of sources - ranging from cheap healthy living guides in the vernacular to personal letters, conduct literature, household inventories, and surviving images and objects - this volume demonstrates that a sophisticated culture of prevention was being developed insixteenth-century Italian cities.

This culture sought to regulate the factors thought to influence health, and centred particularly on the home and domestic routines such as sleep patterns, food and drink consumption, forms of exercise, hygiene, control of emotions, and monitoring the air quality to which the body wasexposed.

Concerns about healthy living also had a substantial impact on the design of homes and the dissemination of a range of household objects.

However, medicine was not the sole factor responsible for these changes.

The surge of interest in preventive medicine received new impetus from the development of the print industry.

Moreover, it was fuelled by classical notions ofwellbeing, re-proposed by humanist culture and by the new interest in geography and climates.

Broader social and religious trends also played a key role; most significantly, the nexus between attention to one's health and spiritual and moral worth promoted both by new ideas of what constitutednobility and by the Counter-Reformation. Six key areas were thought to influence the balance of 'humours' within the body and Healthy Living in Late Renaissance Italy is organised into six main chapters which reflect these concerns: Air, Exercise, Sleep, Food and Drink, Managing the Emotions, and Bodily Hygiene.

The volume is richly illustrated, and offers an accessible but fascinating glimpse into both the domestic lives and health preoccupations of the early modern Italians.