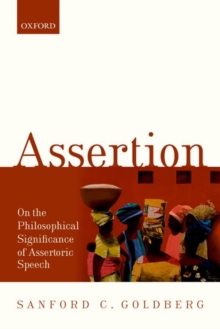 Assertion : On the Philosophical Significance of Assertoric Speech Paperback / softback

Sanford C. Goldberg presents a novel account of the speech act of assertion.

He defends the view that this type of speech act is answerable to a constitutive norm-the norm of assertion.

The hypothesis that assertion is answerable to a robustly epistemic norm is uniquely suited to explain assertion's philosophical significance-its connections to other philosophically interesting topics.

These include topics in epistemology (testimony and testimonial knowledge;epistemic authority; disagreement), the philosophy of mind (belief; the theory of mental content), the philosophy of language (norms of language; the method of interpretation; the theory of linguistic content), ethics (the ethics of belief; what we owe to each other as information-seeking creatures), andother matters which transcend any subcategory (anonymity; trust; the division of epistemic labor; Moorean paradoxicality).

Goldberg aims to bring out these connections without assuming anything about the precise content of assertion's norm, beyond regarding it as robustly epistemic.

In the last section of the book, however, he proposes that we do best to see the norm's epistemic standard as set in a context-sensitive fashion.

After motivating this proposal by appeal to Grice's CooperativePrinciple and spelling it out in terms of what is mutually believed in the speech context, Goldberg concludes by noting how this sort of context-sensitivity can be made to square with assertion's philosophical significance.