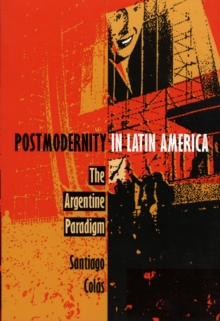 The result has been both a limited understanding of the literature and an impoverished notion of postmodernity.

Santiago Colas challenges both of these approaches and corrects their consequent distortions by locating Argentine postmodernity in the cultural dynamics of resistance as it operates within and against local expressions of late capitalism.

Focusing on literature, Colas uses Julio Cortazar's Hopscotch to characterize modernity for Latin America as a whole, Manuel Puig's Kiss of the Spider Woman to identify the transition to a more localized postmodernity, and Ricardo Piglia's Artificial Respiration to exemplify the cultural coordinates of postmodernity in Argentina.

Informed by the cycle of political transformation beginning with the Cuban Revolution, including its effects on Peronism, to the period of dictatorship, and finally to redemocratization, Colas's examination of this literary progression leads to the reconstruction of three significant moments in the history of Argentina.

His analysis provokes both a revised understanding of that history and the recognition that multiple meanings of postmodernity must be understood in ways that incorporate the complexity of regional differences.

Offering a new voice in the debate over postmodernity, one that challenges that debate's leading thinkers, Postmodernity in Latin America will be of particular interest to students of Latin American literature and to scholars in all disciplines concerned with theories of the postmodern. 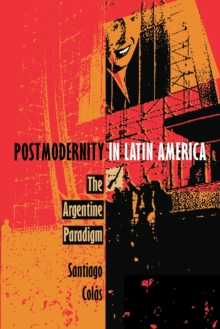