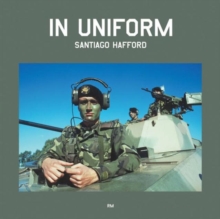 They are casual and somewhat absurd portraits taken during military exhibitions, patriotic ceremonies, and war games.

By abandoning the formality expected in representations of military display, these portraits turn out to be disconcerting, as they explore ironically the signs of identity, rank, and belonging of members of the military establishment. In a highly militarized region, where the wounds caused by recent military dictatorships are still open, this work generates questions about the meaning of these forces in the contemporary world. The series In Uniform was the winner of the second edition of the RM Latin American Photobook Competition, selected by a jury made up of Martin Parr, Horacio Fernandez, Jonathan Roquemore, Dieter Neubert, Iata Cannabrava, Marcos Lopez, Paolo Gasparini, Olivier Andreotti, and Ramon Reverte.