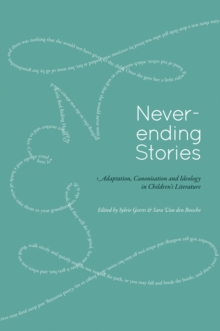 The roots of children's literature are commonly known to lie in adaptation.

The texts most frequently adapted for a child audience are either canonised literary works for adults or children's books which have acquired a high status of their own.

In both cases, the stories are adapted to fit the needs of new readers in other contexts.

This volume frames adaptation in children's literature against a broader socio-cultural background, focusing on the ideological implications of the process.

Emphasising both diversity and evolution, it deals with oppositional forces and recent trends informing adaptation.

At its core are issues of transmediality and new reader roles, adaptations' orientation towards the ideology associated with the pre-text, and canonisation of the pre-text and of the adaptation itself.

The volume is characterised by a broad international and diachronic spread, with topics ranging from traditional Western fairy tale adaptations to retellings of South African oral stories and Persian myths.

The evolution discernible in the cases presented neatly illustrates how the process of adaptation allows canonical texts to develop into never-ending stories.