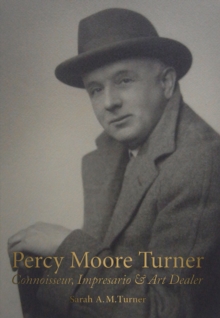 by Sarah A. M. Turner

Grudgingly acknowledged as the main mentor for the Courtaulds in building their art collections, the London and Paris art dealer, Percy Moore Turner, is now largely forgotten in this country.

Yet, in France, he was honoured by the French Government with the award of Officer and then Commander of the Legion d'Honneur and feted by the Museums of France with specially struck medals. In this, the first biography of Percy Moore Turner, his granddaughter, who has access to his few remaining business papers and unpublished autobiography, has researched his life and career. Involved with the Bloomsbury Group from before the First World War, he was actively courted by Roger Fry at the end of the War to manage an artists' association for them when Turner was still serving in the Army.

Instead, Turner promoted them when he opened his London Gallery with some success until 1925 when the Group, embarrassed by the financial losses caused by them to him, `sacked' him on friendly terms. Born in Halifax in 1877 into a family of hosiers and haberdashers, Turner's life and career spanned two World Wars and periods of economic volatility.

A longstanding friend of Kenneth Clark, Turner strove to ensure that his own art collection was placed appropriately in museums and galleries throughout Britain and France, considering himself merely the custodian of the pictures he owned.