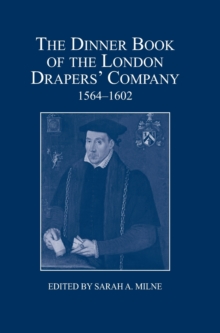 by Sarah A. Milne

The Dinner Book is a rare account of a series of 36 dinners hosted by the London Drapers' Company between 1564 and 1602.

At these events, new Company leaders symbolically received corporate endorsement by participating in investiture ceremonies in front of an elite group of Company members and their selected guests.

Though all in attendance enjoyed lavish spreads of food and drink, each table received varying, carefully apportioned dishes designed to ensure honour and city hierarchies were upheld. As a compilation of incredibly detailed accounts for many consecutive years of corporate dining, the Drapers' Company Dinner Book is extraordinary.

It records the organisation of the Company's dinners and the supply of items of food and drink, as well as the names of guests in the hall and employees in the kitchen.

Food gifts sent out after the dinner are recalled comprehensively (which on one occasion consisted of 162 venison pasties).

During the period covered by the Dinner Book, new trading corporations and accelerated city growth began to undermine the economic powerbase of London guilds such as the Drapers.

Dinner records indicate that the City companies in the sixteenth and seventeenth centuries recognised the potential of their annual Election Dinners to reinforce the antiquity of corporate authority, inferring a mythical past as a means of legitimizing their stake in the future. This edition is presented with introduction and notes to the text. SARAH A. MILNE is a Research Associate at the Survey of London, Bartlett School of Architecture, University College London.

She is also a Lecturer in the History and Theory of Architecture at the University of Westminster.