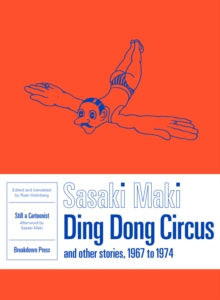 Drawn between 1967 and 1974, the fifteen stories within follow Sasaki's unprecedented exploration of collage methods in comics storytelling.

Weaving through references to the Beatles, the Vietnam War, and Andy Warhol, Ding Dong Circus demonstrates that Sasaki was not only a manga pioneer, but also an essential figure in Japanese Pop Art and the critical avant-garde art scene of the 1960s.