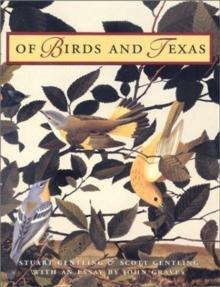 Of Birds and Texas Hardback

Winner, Western Books Exhibition,The Rounce & Coffin Club As John James Audubon's Birds of America was the most magnificent ornithological publication of the nineteenth century, Of Birds and Texas may rightfully claim that honor for the twentieth. Originally published in a twenty-three-by-twenty-nine-and-a-half-inch elephant folio limited edition in 1986, this collection of forty exquisitely detailed bird portraits and ten Texas landscapes, with accompanying commentary by the artists Scott Gentling and Stuart Gentling and a personal essay by Texas' most respected writer, John Graves, won widespread acclaim.

A. C. Greene praised it as "the most stunning and prodigious book in Texas history (and possibly forever)," while the Dallas Morning News deemed it "the most magnificent book ever produced in Texas." This edition is intended to bring Of Birds and Texas to a wider audience.

Maintaining the high standards of design and production that characterized the limited edition, it amplifies the original publication by including nearly thirty additional bird paintings or remarques, which the Gentling brothers produced for subscribers who helped underwrite the first printing.

It also contains a new essay by Stuart Gentling, "Of Birds and Texas, Audubon and Us," in which he describes not only how the brothers' deep admiration for John James Audubon led to the creation of this book, but also how their serendipitous discovery of a long-lost Audubon painting saved the project when a lack of funds threatened to end it.