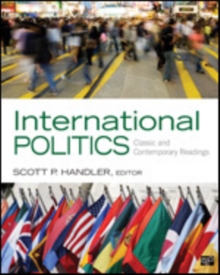 This comprehensive and smartly organized Reader showcases the very best, most engaging international relations scholarship and political debate: over 90 carefully edited readings representing the field's central traditions as well as important contemporary debates that capture new challenges and trace the development of the scholarship.

But this is more than just a mere collection of readings: International Politics is purpose-bulit to help instructors and students engage critically, and in the spirit of intellectual pluralism, with some of the world's most challenging and provocative questions.

The readerAEs substantial part headnotes put each of the selections into context and also into conversation with one another, and Handler consciously models good critical analytic questions throughout.

At the end of each part header, there is a set of robust discussion questions that serve to guide discussion of the readings or provide the basis for essay questions.

Throughout, International Politics emphasizes the importance of intellectual pluralism in reaching conclusions about the worldAEs most pressing problems, and the selections have been chosen in order to best represent the full scope of topics and approaches.

Unique to this reader are selections in each part focused specifically on ethical issues, which invite readers to engage in and make complex decisions about world dilemmas.

The bookAEs four main partsutheoretical traditions, war and peace, international political economy, and emerging issuesudovetail with how most IR courses are taught.

In Part I, the major traditions covered include introductions to realism, liberalism, constructivism, their major variants, social scientific and theoretical analysis, and decision-making models.

The fourth part of the book looks at emerging issues, including power and inequality, state-building, failed states, foreign aid, international law, the environment, international order, and ethics and development assistance.

Class-tested over several years at the United States Military Academy and elsewhere, International Politics was built from the ground up to introduce students to the traditions and new foundations of international relations as well to the principles of intellectually rigorous thought.

Priced for value, the reader offers nearly twice the number of readings as other leading IR readers and a much broader choice of topics, but at the same price.