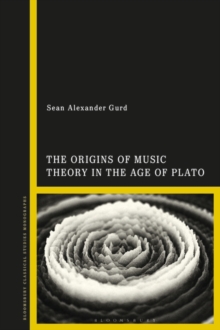 The Origins of Music Theory in the Age of Plato Hardback

Listening is a social process. Even apparently trivial acts of listening are expert performances of acquired cognitive and bodily habits.

Contemporary scholars acknowledge this fact with the notion that there are "auditory cultures." In the fourth century BCE, Greek philosophers recognized a similar phenomenon in music, which they treated as a privileged site for the cultural manufacture of sensory capabilities, and proof that in a traditional culture perception could be ordered, regular, and reliable.

This approachable and elegantly written book tells the story of how music became a vital topic for understanding the senses and their role in the creation of knowledge.

Focussing in particular on discussions of music and sensation in Plato and Aristoxenus, Sean Gurd explores a crucial early chapter in the history of hearing and gently raises critical questions about how aesthetic traditionalism and sensory certainty can be joined together in a mutually reinforcing symbiosis.