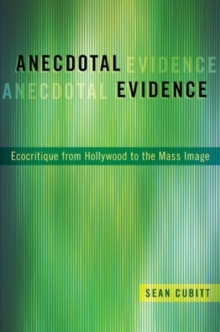 Anecdotal Evidence : Ecocritiqe from Hollywood to the Mass Image Hardback

Ecocritique is a practice of radical questioning, as essential to the critical armoury as feminism and postcolonialism have become.

Like them, it extends beyond judgements about texts with clear ecological themes, demonstrating the significance of ecocriticism for any advanced understanding of cultural forms.

Anecdotal method is ecocritical because it focuses on encounters, concentrated moments of crisis when social ordering and ecological forces clash.

Anecdotal Evidence provides an outline of the need for and principles of anecdotal method; a case study of eco-critical themes in Hollywood films shaped by the Global Financial Crisis; and aconfrontation with mass image databases of social and streaming media that due to their scale and organisation appear at first immune to anecdotal method.

Only because the environment has a history is it possible to intervene environmentally. Because we continually misrecognise the historical production of environments, the first task of ecocritique is to bring our formative concept of ecology into crisis.

Its final task will be to achieve the good life for everything connected by thehistorical implication of humans in ecology, and ecology in humans.

No politics can be undertaken in our times except through media: ecocritical humanities have a key role in rethinking ecopolitics in the 21st century.