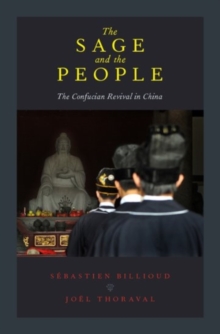 The Sage and the People : The Confucian Revival in China Paperback / softback

After a century during which Confucianism was viewed by academics as a relic of the imperial past or, at best, a philosophical resource, its striking comeback in Chinese society today raises a number of questions about the role that this ancient tradition-re-appropriated, reinvented, and sometimes instrumentalized-might play in a contemporary context. The Sage and the People, originally published in French, is the first comprehensive enquiry into the "Confucian revival" that began in China during the 2000s.

It explores its various dimensions in fields as diverse as education, self-cultivation, religion, ritual, and politics.

Resulting from a research project that the two authors launched together in 2004, the book is based on the extensive anthropological fieldwork they carried out in various parts of China over the next eightyears.

Sebastien Billioud and Joel Thoraval suspected, despite the prevailing academic consensus, that fragments of the Confucian tradition would sooner or later be re-appropriated within Chinese society and they decided to their hypothesis.

The reality greatly exceeded their initial expectations, as the lateryears of their project saw the rapid development of what is now called the "Confucian revival" or "Confucian renaissance". Using a cross-disciplinary approach that links the fields of sociology, anthropology, and history, this book unveils the complexity of the "Confucian Revival" and the relations between the different actors involved, in addition to shedding light on likely future developments.