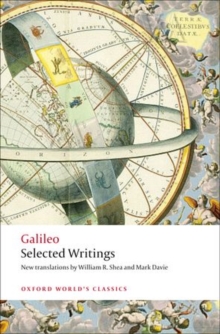 'Philosophy is written in this great book which is continually open before our eyes - I mean the universe...'Galileo's astronomical discoveries changed the way we look at the world, and our place in the universe.

Threatened by the Inquisition for daring to contradict the literal truth of the Bible, Galileo ignited a scientific revolution when he asserted that the Earth moves.

Shea's version of the Latin Sidereal Message makes accessible the book that created a sensation in 1610 with its account of Galileo's observations using the newly invented telescope. All Galileo's contributions to the debate on science and religion are included, as well as key documents from his trial before the Inquisition in 1633. A lively introduction and clear notes give an overview of Galileo's career and explain the scientific and philosophical background to the texts.