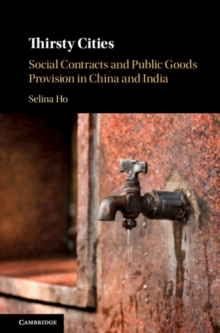 Why does authoritarian China provide a higher level of public goods than democratic India?

Studies based on regime type have shown that the level of public goods provision is higher in democratic systems than in authoritarian forms of government.

However, public goods provision in China and India contradicts these findings.

Whether in terms of access to education, healthcare, public transportation, and basic necessities, such as drinking water and electricity, China does consistently better than India.

This book argues that regime type does not determine public goods outcomes.

Using empirical evidence from the Chinese and Indian municipal water sectors, the study explains and demonstrates how a social contract, an informal institution, influences formal institutional design, which in turn accounts for the variations in public goods provision.