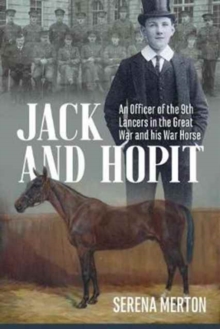 Jack and Hopit, Comrades in Arms : An Officer of the 9th Lancers in the Great War and His War Horse Paperback / softback

A chance discovery of the existence of the gravestone carved with the battle honours of Hopit - the Tipperary-foaled hunter - led the author to research the Great War relationship of Hopit and 19-year-old Second Lieutenant John (Jack) Forrester Colvin in their four long years on the Western Front.

Extensive family photograph albums bring a personal element to the story of this long partnership, while the war diaries of the 9th Lancers and letters from individual soldiers tell the wartime story.

Jack's father, Forrester, commanded two reserve regiments of cavalry and was Advisor of Horses to the 11th Corps of the British Expeditionary Force (BEF) throughout the Great War.

After the Armistice and, as part of the Army of Occupation in Cologne, he was responsible for the future of the horses who had served King and Country - choosing which were to be repatriated; which were to continue with their regiments; and which were to be sold to French and Belgian farmers (and, unfortunately, butchers).

Jack and Hopit's post-war years were spent point-to-pointing, hacking and hunting together - and though Hopit died in 1927, his elaborate gravestone hints at the closeness of their relationship through those most gruelling of years on the Western Front.