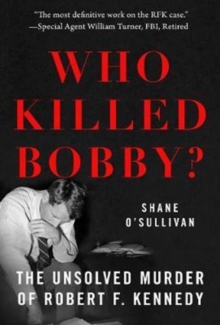 Kennedy celebrated his victory in the California Democratic primary with a rousing victory speech anticipating a successful run for the presidency.

But in Who Killed Bobby? Shane O'Sullivan makes a stunning case that will fundamentally alter the way the public views Bobby Kennedy's death. After an autopsy, LA County Coroner Thomas Noguchi concluded that the deadly shots had been fired from an inch behind Kennedy's right ear, but not a single witness placed Sirhan this close; most placed his gun several feet away, and in front of the senator.

Moreover, Vincent Di Pierro, along with several other witnesses, saw Sirhan with a girl in a polka-dot dress in the pantry, exclaiming, "We shot him.

We shot him." O'Sullivan presents new interviews with key witnesses the LAPD browbeat into changing their stories.

He also presents a damning case against Sirhan's psychological state.

Sirhan repeatedly scrawled "RFK Must Die" in his notebook and recreated the same kind of automatic writing when later hypnotized by his defense team.

O'Sullivan cites psychiatric evidence that Sirhan was an extremely susceptible hypnotic subject, whose behavior on the night of the shooting fit the profile of a programmed assassin.

Was Sirhan programmed to be a decoy for the real killer?