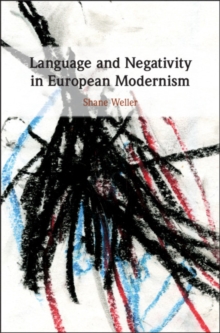 This book charts the history of a distinct strain of European literary modernism that emerged out of a radical re-engagement with late nineteenth-century language scepticism.

Focusing first on the literary and philosophical strands of this language-sceptical tradition, the book proceeds to trace the various forms of linguistic negativism deployed by European writers in the interwar and post-war years, including Franz Kafka, Georges Bataille, Samuel Beckett, Maurice Blanchot, Paul Celan, and W.

G. Sebald. Through close analyses of these and other writers' attempts to capture an 'unspeakable' experience, Language and Negativity in European Modernism explores the remarkable literary attempt to deploy the negative potentialities of language in order to articulate an experience of what, shortly after the Second World War, Beckett described as a vision of 'humanity in ruins'.