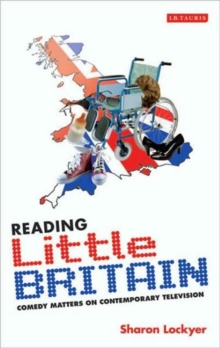 'Little Britain' arrived on British TV in 2003 - and was an instant hit.

Matt Lucas and David Walliams wrote and performed, and their sharp satirical genius created this character-based sketch show - Vicky Pollard, Dafydd 'I'm the only gay in the village', Ting Tong Macadangdang are hard to forget.

Its huge popularity as cult-comedy on radio, then television, with its success as mainstream award-winning comedy and as a national and international TV phenomenon, have been tempered by criticism.

It's pushed the boundaries of taste too far, some have claimed; it's grotesquely un-politically correct, mocks social groups and participates in the 'humour of humiliation' say others.

Timely and comprehensive, this must-read book on 'Little Britain' for fans and scholars is the first to provide lively critiques of the show by leading writers, who explore its appeal and dissect its controversies.

They look into representations of gender, sexuality, race, disability and class, into sketch-show conventions, the art of the comedy catchphrase, audiences' responses and still more.

It provides too a Film, TV and Radio Guide.