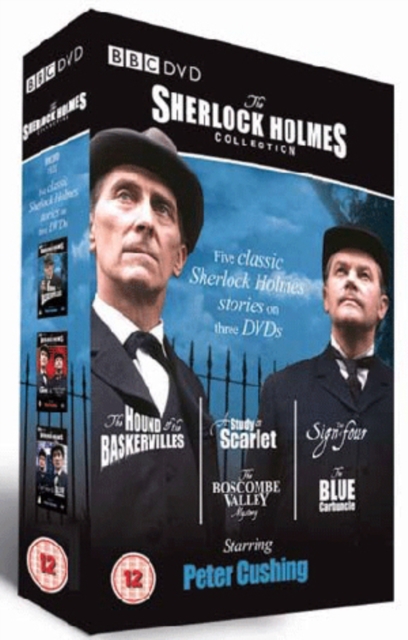 Five episodes from the 1968 TV series based on the famous stories by Sir Arthur Conan Doyle, starring Peter Cushing as Holmes and Nigel Stock as Dr Watson.

In 'The Hound of the Baskervilles (Parts 1 and 2)', based on the most well-known Sherlock Holmes story of them all, Holmes travels to Dartmoor to unravel the murder mystery that has haunted the Baskerville family for generations. 'A Study in Scarlet' is based on the very first Sherlock Holmes story, in which Holmes must track down a relentless killer when the dead bodies of a string of victims are discovered, all with the word 'Rache' (German for 'revenge') written in blood next to where they are lying.

In 'The Boscombe Valley Mystery', Holmes must prove that a young man found next to the dying, brutally beaten body of his tyrannous bully of a father is not guilty of his murder.

In 'The Sign of Four', Holmes and Watson are intrigued by the case of Mary Morstan, whose father disappeared ten years previously.

Every year since, Mary has received a pearl from a mystery benefactor, and she now requires the Baker Street detective to act as her escort in a meeting with the unknown patron.

In 'The Blue Carbuncle', a priceless jewel with a sinister history has been stolen from its owner, the Countess of Morcar.

When it is found in a goose's crop, the events surrounding how it got there and who the true thief is are puzzles only a genius such as Sherlock Holmes can unravel.

This was the last episode in this series (which was one of the first TV series ever to be shot in colour), and was originally screened on 23rd December 1968.