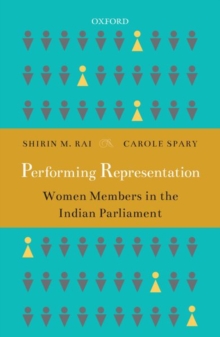 Breaking new ground in scholarship on gender and politics, Performing Representation is the first comprehensive analysis of women in the Indian parliament.

It explores the possibilities and limits of parliamentary democracy and the participation of women in its institutional performances.

Offering a new, multi-method analysis of the gendered nature of India's parliament through an examination of electoral data, media reports and life stories of women Members of Parliament it sheds light on the performance, aesthetics, and norms of parliamentary life.

It explores how the gendered axis of power underpins the performance of parliament and its Members as well as the political economy in which they are embedded. The book makes a strong case for taking parliamentary politicsseriously in these times of populism, without either a utopian framing of women MPs as challengers of masculinised institutional politics or seeing them simply as docile actors in a gendered institution.

It addresses these questions as part of global feminist debates on the importance of the women's representation in political institutions.