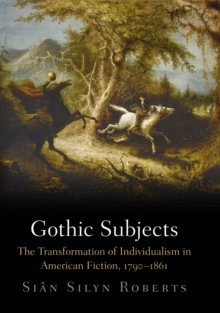 Gothic Subjects : The Transformation of Individualism in American Fiction, 1790-1861 Hardback

Beginning in the 1790s, North American readers developed an appetite for the gothic novel, as imported, reprinted, and pirated editions of British and European romances flooded the market alongside homegrown works.

In Gothic Subjects, Sian Silyn Roberts accounts for the sudden and considerable appeal of the gothic during this period by contending that it prepared a culturally diverse American readership to think of itself as part of a transatlantic world through which goods, people, and information could circulate.

By putting gothic literature in dialogue with the writings of Locke, Hume, Reid, Smith, Rousseau, and other major figures of the European Enlightenment, Silyn Roberts shows how the early American novel participated in the process of revising and transforming the figure of the modern individual for a fluid, contingent Atlantic population. Exploring works of fiction by Charles Brockden Brown, Leonora Sansay, Sally Sayward Barrell Keating Wood, Edgar Allan Poe, Robert Montgomery Bird, Nathaniel Hawthorne, and William Wells Brown, among others, Silyn Roberts argues that the gothic helped post-Revolutionary readers to think of themselves as political subjects.

By reading the emergence of a national literary style in terms of its appropriation and reinterpretation of British cultural forms, Gothic Subjects situates itself at the crux of several important issues in American literary history: transatlantic literary relations, the connection between literature and political philosophy, the paradoxes of sovereign power, and the form of the novel.

In doing so, Gothic Subjects powerfully rethinks some of our previous assumptions about the cultural work of the American gothic tradition.