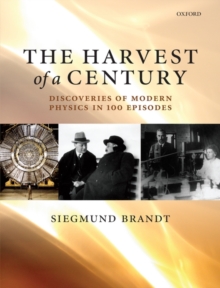 The Harvest of a Century : Discoveries in Modern Physics in 100 Episodes Hardback

by Siegmund (Department of Physics, University of Siegen, Germany) Brandt

Physics was the leading science of the twentieth century and the book retraces important discoveries, made between 1895 and 2001, in 100 self-contained episodes.

Each is a short story of the scientists involved, their time, and their work.

Together they form a mosaic of modern physics: formulating relativity and quantum mechanics, finding the constituents of matter and unravelling the forces between them, understanding the working of conductors and semiconductors,discovering and explaining macroscopic quantum effects (superconductivity, superfluidity, quantum Hall effect), developing novel experimental techniques like the Geiger counter and particle accelerators, building revolutionary applications like the transistor and the laser, and observing astonishingfeatures of our cosmos (expanding universe, cosmic background radiation).

The text is intended for easy reading. Occasionally, a more thorough discussion of experimental set-ups and theoretical concepts is presented in special boxes for readers interested in more detail.

The book is richly illustrated by about 600 portraits, photographs and figures.