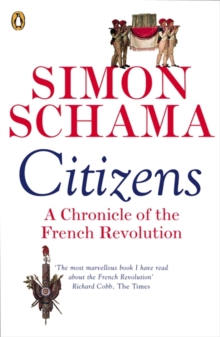 Citizens : A Chronicle of The French Revolution Paperback / softback

One of the great landmarks of modern history publishing, Simon Schama's Citizens: A Chronicle of the French Revolution is the most authoritative social, cultural and narrative history of the French Revolution ever produced. 'Monumental ... provocative and stylish, Simon Schama's account of the first few years of the great Revolution in France, and of the decades that led up to it, is thoughtful, informed and profoundly revisionist' Eugen Weber, The New York Times Book Review 'The most marvellous book I have read about the French Revolution' Richard Cobb, The Times 'Dazzling - beyond praise - He has chronicled the vicissitudes of that world with matchless understanding, wisdom, pity and truth, in the pages of this marvellous book' Bernard Levin, Sunday Times 'Provides an unrivalled impression of the currents and contradictions which made up this terrible sequence of events' Antony Beevor, Express Simon Schama is University Professor in Art History and History at Columbia University in New York, and one of the best-known scholars in Britain in any field.

He is the prize-winning author of numerous books, including Dead Certainties (Unwarranted Speculations), Landscape and Memory, Rembrandt's Eyes and three volumes of A History of Britain.

He is also the writer-presenter of historical and art-historical documentaries for BBC Television.

He lives outside New York City with his wife and children.