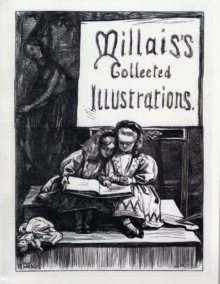 Collected from his work for Trollope, Tennyson, Collins, and the weekly periodicals over most of his long working life, these prints range from visionary romance to comedy of manners.

Together they represent some of the finest black and white work of the Victorian era.

Sir John Everett Millais's Pre-Raphaelite Brotherhood with six other painters revolutionized the art world with a visionary intensity of both subject matter and style.

Although Millais soon abandoned the Pre-Raphaelite style--with an increasingly broad use of paint, and an interest in aestheticism, portraiture, and stirring national historical subjects--he remained the preeminent painter of his period.

Not least among his achievements was a revival of serious black and white work.

His drawings were widely published and became very influential, leading to the creation of a distinct and greatly respected English school of printmaking.

This book shows the wide range of his work.