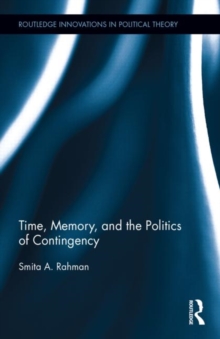 Time, Memory, and the Politics of Contingency Hardback

In recent years, there has been an increased attention to temporality in political theory, and such attention is sorely needed.

For too long political theory, with the exception of occasional phenomenological forays, has remained grounded in a particular experience of time as linear and sequential.

This book aims to unsettle the dominant framework by putting time itself, and the experience of time in everyday life, at the center of its critical analysis.

Smita Rahman focuses on the experience of time as one where past, present, and future intermingle with each other and refuse to adhere to a sequential structure.

Rather than trying to tame the flux of time, this book places this "out of joint" experience of time at the center of its analysis of global politics.

Rahman takes the highly abstract concept of time and decenters it to speak to a wide range of political issues across disciplines.

She does so by exposing the cultural construction of the foundational concept of time in political theory and attending closely to the challenges of cultural incommensurability that it encounters in a globalized world of difference.

Specifically, the book looks at interrogation practices in Afghanistan, the challenges of coping with the burdens of collective memory in Algeria, South Africa, and Rwanda, the difficulty of uncritically applying such a framework to the Muslim world through the language of secularism, and finally at the beginnings of democratic emergence in Bangladesh to explore a politics of contingency. By focusing on issues of contemporary global politics through the lens of political theory, this book draws on literature across disciplines and explores the complex image of time by engaging the work of thinkers for whom time and memory have emerged as a critical issue of analysis, and unpacking the politics of contingency that emerge from such a reading.