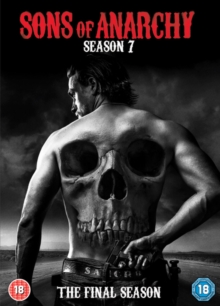 All 13 episodes from the seventh and final season of the US biker drama.

The story follows the lives of the SAMCRO crew as they find themselves involved in gangs, gun violence and deals with corrupt politicians.

The gang has to deal with threats to its authority, as well as internal tensions such as the ever-growing doubts of its deputy leader, Jax (Charlie Hunnam), about the gang's role in the town.

In this season, Jax is freed from prison and sets out to get revenge, SAMCRO makes an unlikely ally and Jax takes the final steps to realising his father's legacy.

The episodes are: 'Black Widower', 'Toil and Till', 'Playing With Monsters', 'Poor Little Lambs', 'Some Strange Eruption', 'Smoke 'Em If You Got 'Em', 'Greensleeves', 'The Separation of Crows', 'What a Piece of Work Is Man', 'Faith and Despondency', 'Suits of Woe', 'Red Rose' and 'Papa's Goods'.