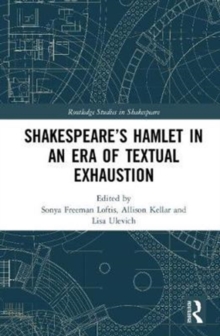 SHAKESPEARE S HAMLET IN AN ERA OF TEXTUAL EXHAUSTION Hardback

"Post-Hamlet: Shakespeare in an Era of Textual Exhaustion" examines how postmodern audiences continue to reengage with Hamlet in spite of our culture's oversaturation with this most canonical of texts.

Combining adaptation theory and performance theory with examinations of avant-garde performances and other unconventional appropriations of Shakespeare's play, Post-Hamlet examines Shakespeare's Hamlet as a central symbol of our era's "textual exhaustion," an era in which the reader/viewer is bombarded by text-printed, digital, and otherwise.

The essays in this edited collection, divided into four sections, focus on the radical employment of Hamlet as a cultural artifact that adaptors and readers use to depart from textual "authority" in, for instance, radical English-language performance, international film and stage performance, pop-culture and multi-media appropriation, and pedagogy.