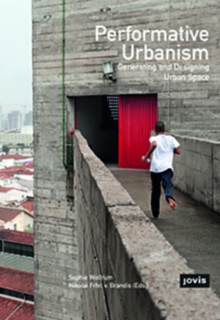 Comparing and constrasting the practicality of urban reality with the theory of architectural design. The concept of relational space in urbanism - understanding the space of the city as produced by society - is connected with an understanding of architecture unfolding in situations.

Urban space is induced by architecture, space is produced while experiencing architecture within a situation.

There is a dialectical interplay between architectonic material (intra-architectonic reality) and usage and action (urban reality).

Thus, an architectonic situation can be interpreted as performative in the sense of performativity as it has emerged in the discourse over the last decade.

The everyday urban life of the city, with all its potential and conflicts, is taken into consideration.

Analysing the urban is not enough. This discourse is about Urban Design. Is architectural design one part, and the actualisation of architecture in a performative incident another?